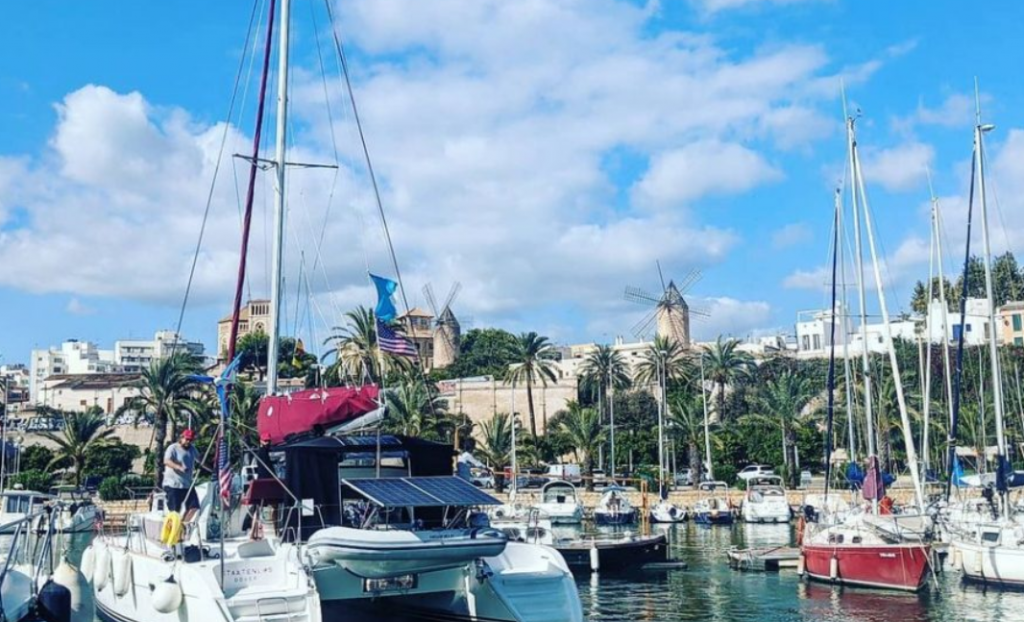 Let’s be clear to start. This is not a post about going stateless in Shanghai.

I have partied it up in China before. But that was back when I was jet setting the world, rather than sailing the high seas aboard The Staatenlos Catamaran.

So in this post, we’re talking about shanghaiing, also known as crimping. It’s the practice of kidnapping people to serve as sailors. The term likely got its name from kidnapped sailors commonly being held captive on ships headed for Shanghai.

This experience also should not be confused with the pirates I didn’t exactly run into in Mogadishu — who hold entire ships hostage for ransom — or the Bounty mutineers who settled on Pitcairn Island after successfully overthrowing the captain aboard their Royal Navy vessel. 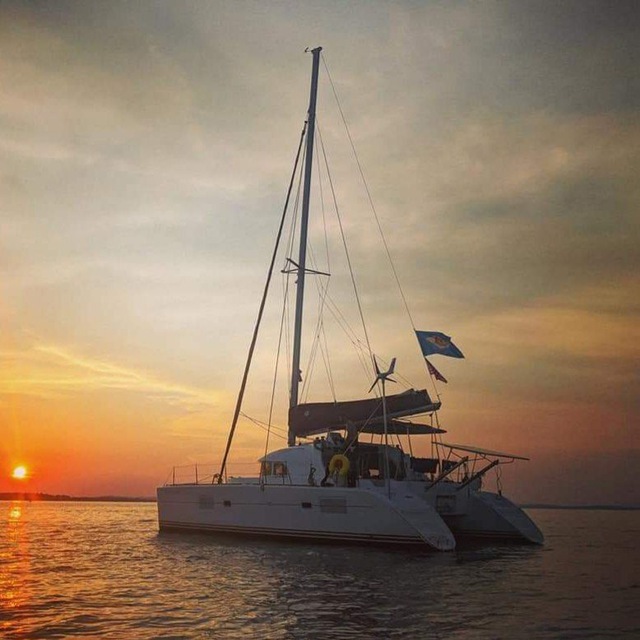 On this journey that may or may not involve a kidnapping, the Staatenlos will be sailing from Montenegro to the Canary Islands. We’ll break up the journey from the Adriatic to the Atlantic into a few parts with some Mediterranean stops along the way. For instance in Mallorca…

After my up and down stay in Montenegro, I took a quick trip to Switzerland, Sicily, Sardinia, Lampedusa, Switzerland again, Lichtenstein, and even more. While I trotted around Europe for work, we will keep our focus on the Staatenlos as it battled the stormy seas from Montenegro all the way to the Spanish island of Mallorca. 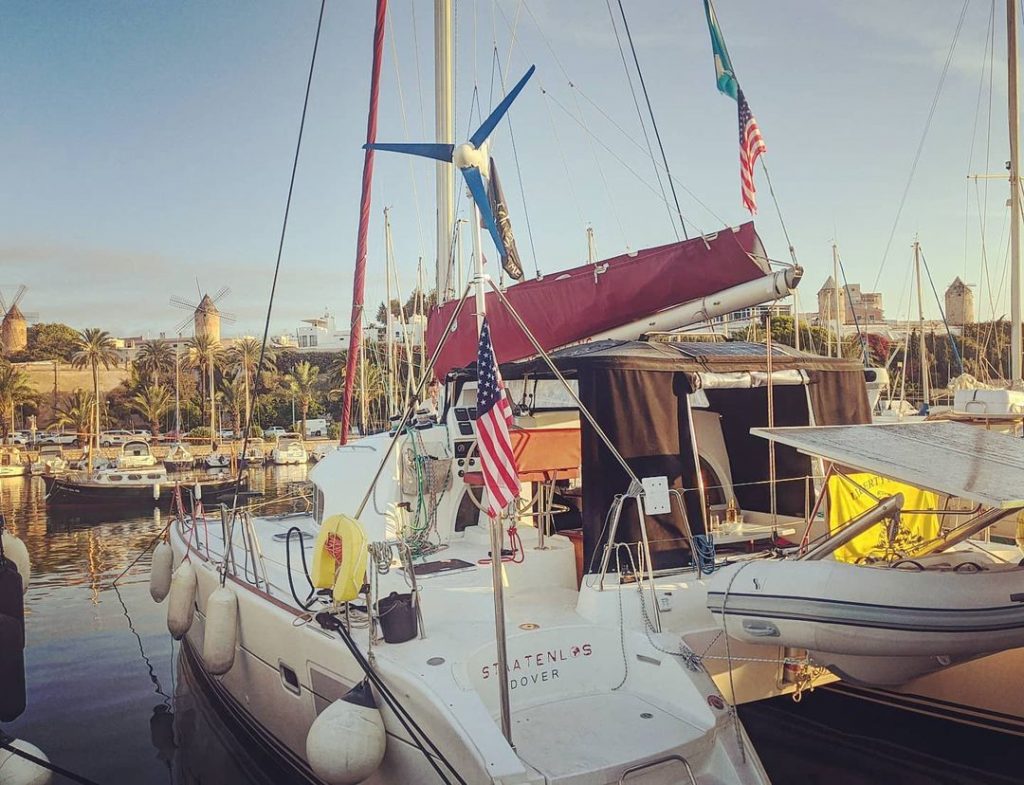 My skipper Josh remained in Montenegro for about ten more days while we waited for a bowsprit to arrive. A bowsprit is the second part that goes in front of the bow in front of the ship, which is needed in order to install the sail. 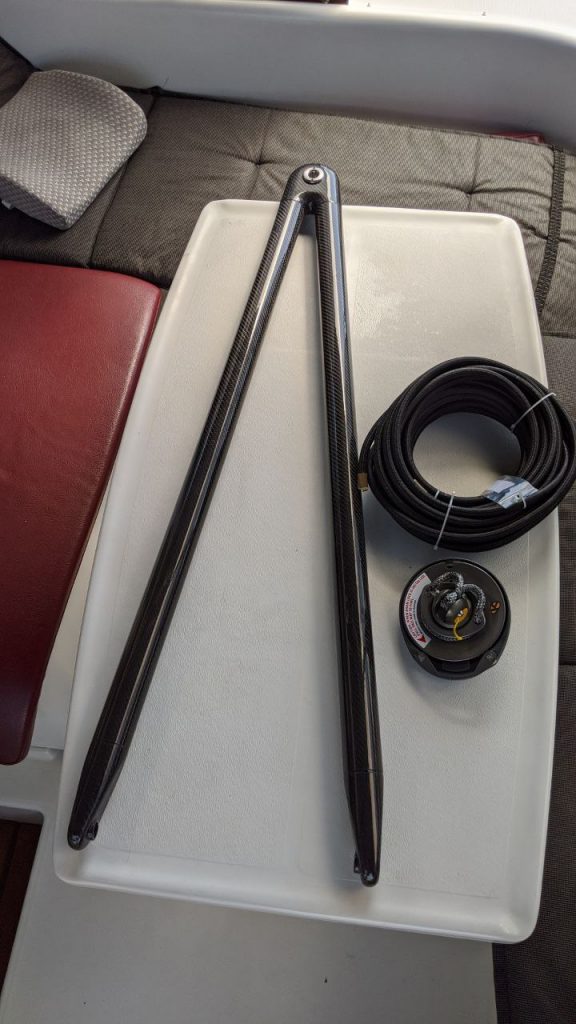 We waited for the bowsprit back in Montenegro for a long time, but it arrived much later than we had expected. When it finally arrived, we were set even further back because it was the wrong part. We had to send it back and order a new one to be delivered to Mallorca, but it never arrived there either because of some problems getting through customs. 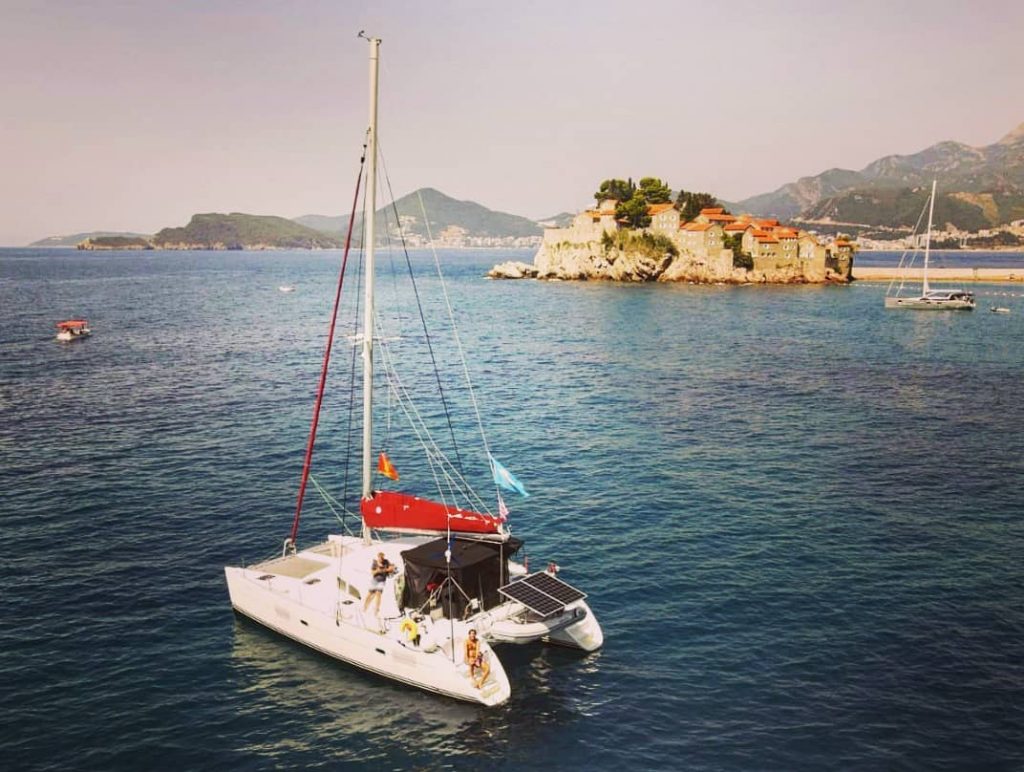 Ultimately, the correct part had to be sent to Malaga and then finally be installed upon arrival in the Canary Islands.

Back in Montenegro, Josh finished up caring for the boat, getting some more work done on it, and fixing some minor things. Then he set sail.

When I was in Sicily, Sardinia, and Lampedusa, Josh actually sailed very close to me. I thought we might have some problems due to the worsening Covid-1984 situation, so I stayed nearby to keep an eye on my boat. 🙂 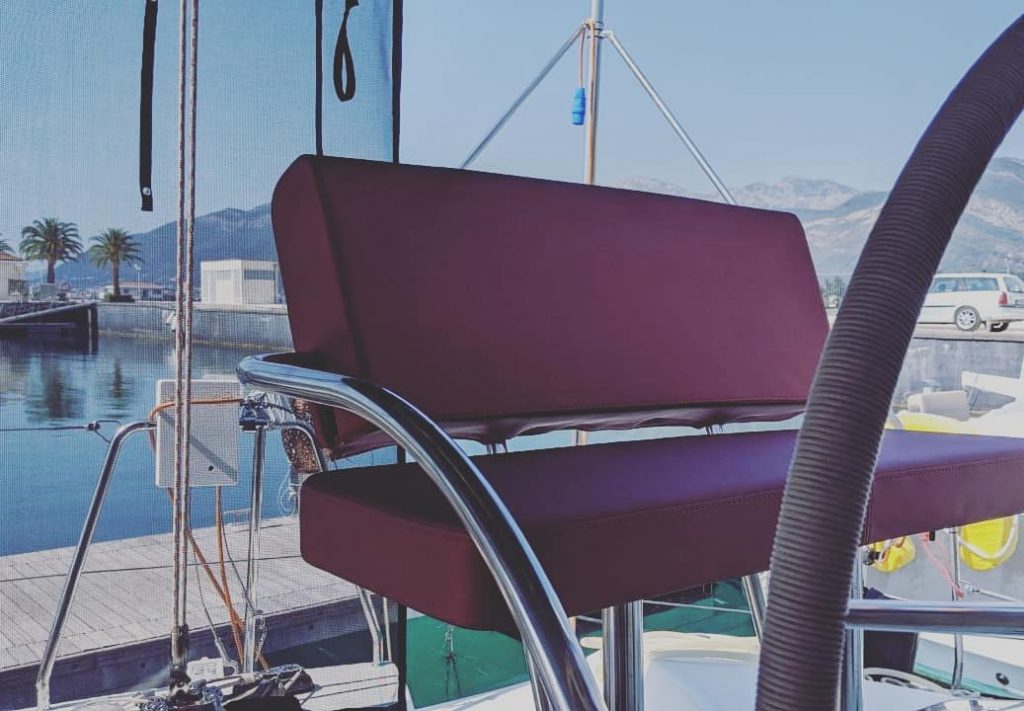 The actual sailing should have only taken around seven to ten days, but it took three weeks due to multiple storms in the Meditteranean, which effectively kept the boat stuck for the first week in Sicily.

There was a huge storm announced nearby in Montenegro, so the boat needed to remain docked. The boat and crew spent another night in Bar, and from there they went directly to Italy headed for the Strait of Messina and then Palermo. 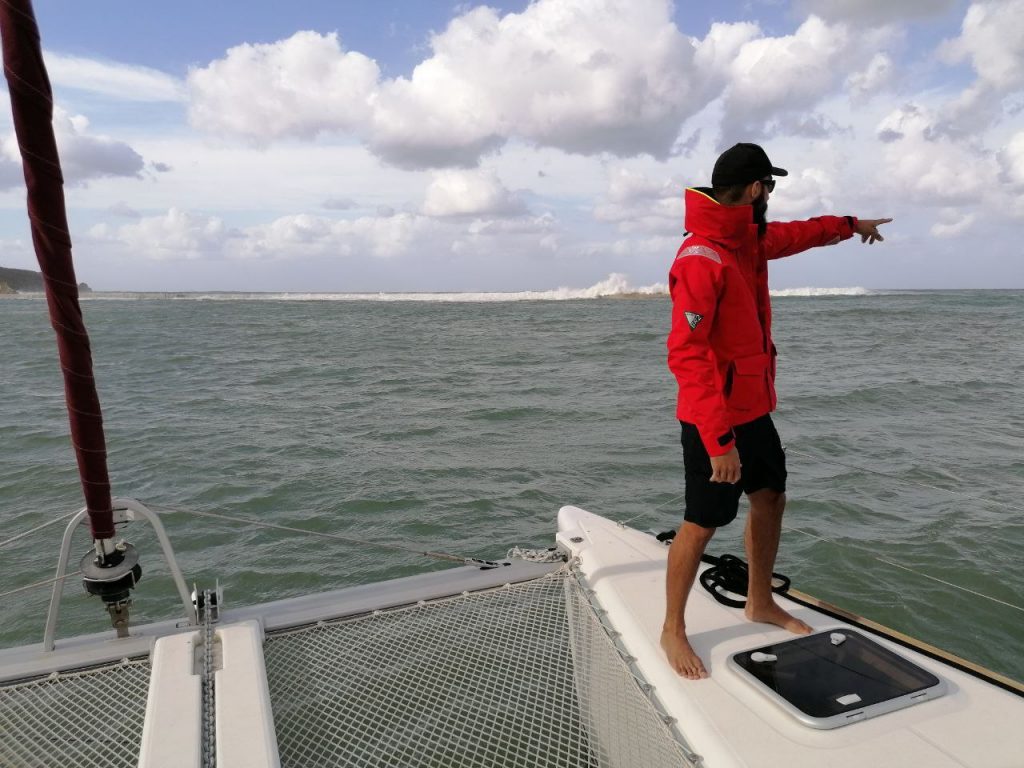 As the Staatenlos made its way from the Strait of Messina to Palermo, I had the opportunity to see the boat from the beach in Capo d-Orlando, a town on the north coast of Sicily. I stood on the beach waving to them, and we even had a drone meeting together! 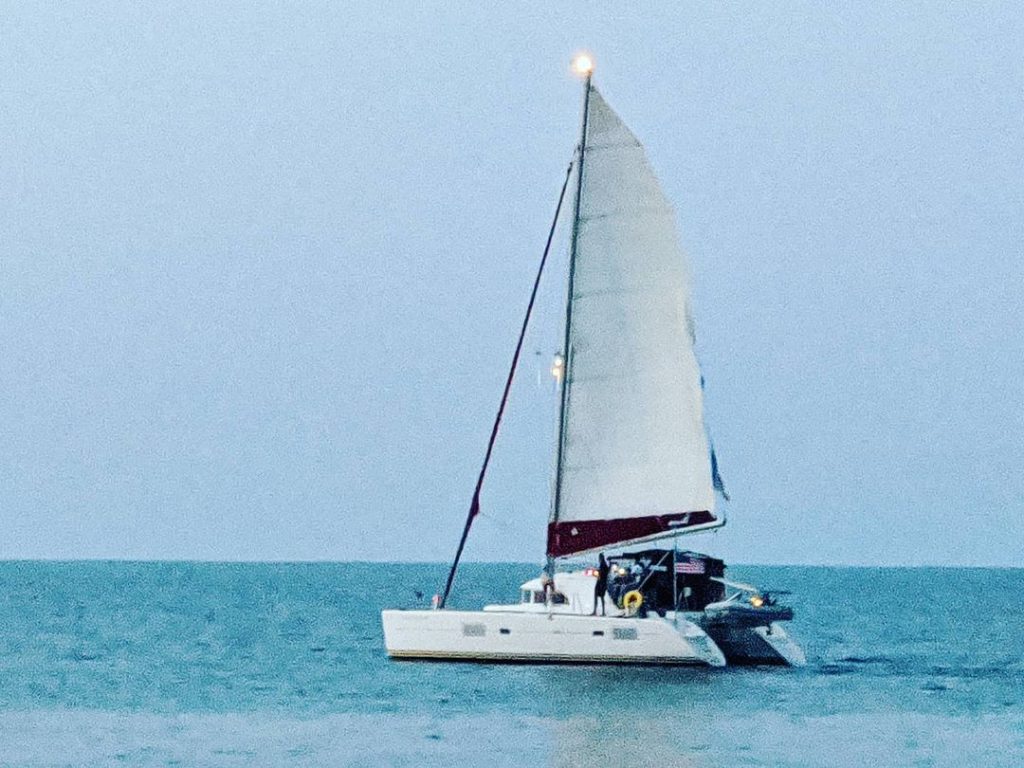 Waving to the Staatenlos just 200 meters from shore

They flew the drone over from the boat and all said hello to me as I shouted back to them. I was very happy to see my boat again from this Sicilian beach. 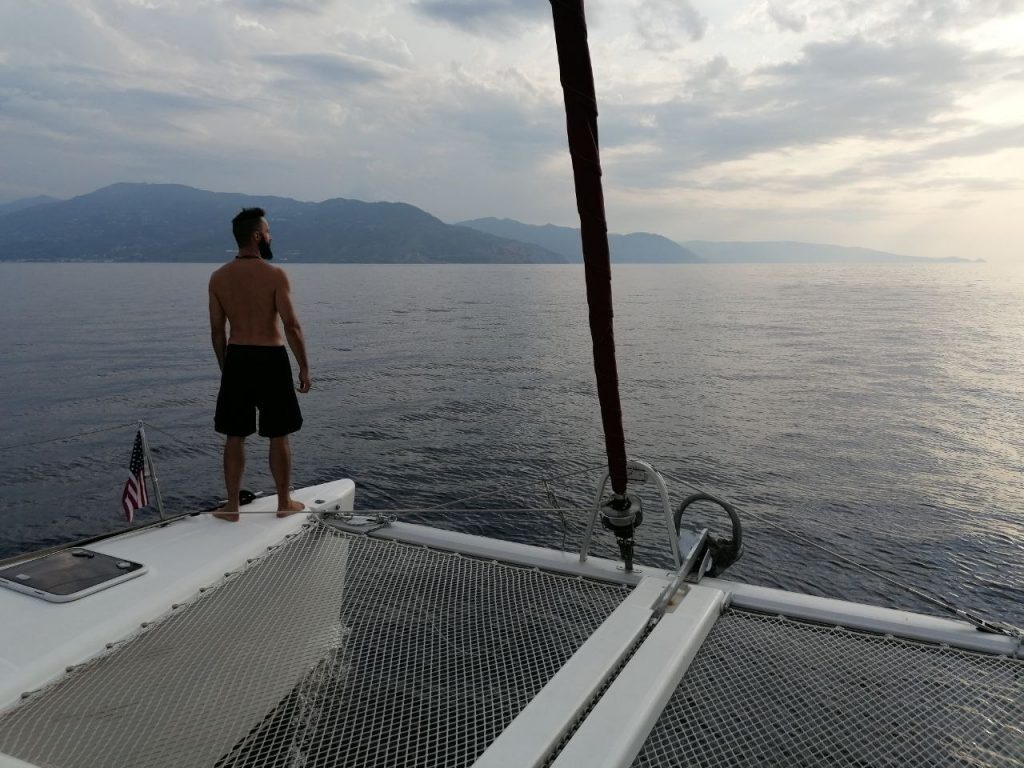 View from the other side

They continued on from there for two days in a town near Palermo called Castellammare. The crew anchored the boat outside of the harbor for almost a week because a very strong storm was coming which would cause very high waves. Luckily, the anchor held strong.

After our brief meeting at the beach in Sicily, and then the seemingly never-ending storm which raged on for a week, there was a short window of good weather to travel onward. The next storm would already be rolling in fast when the Staatenlos arrived in Carloforte in Sardinia. But first… 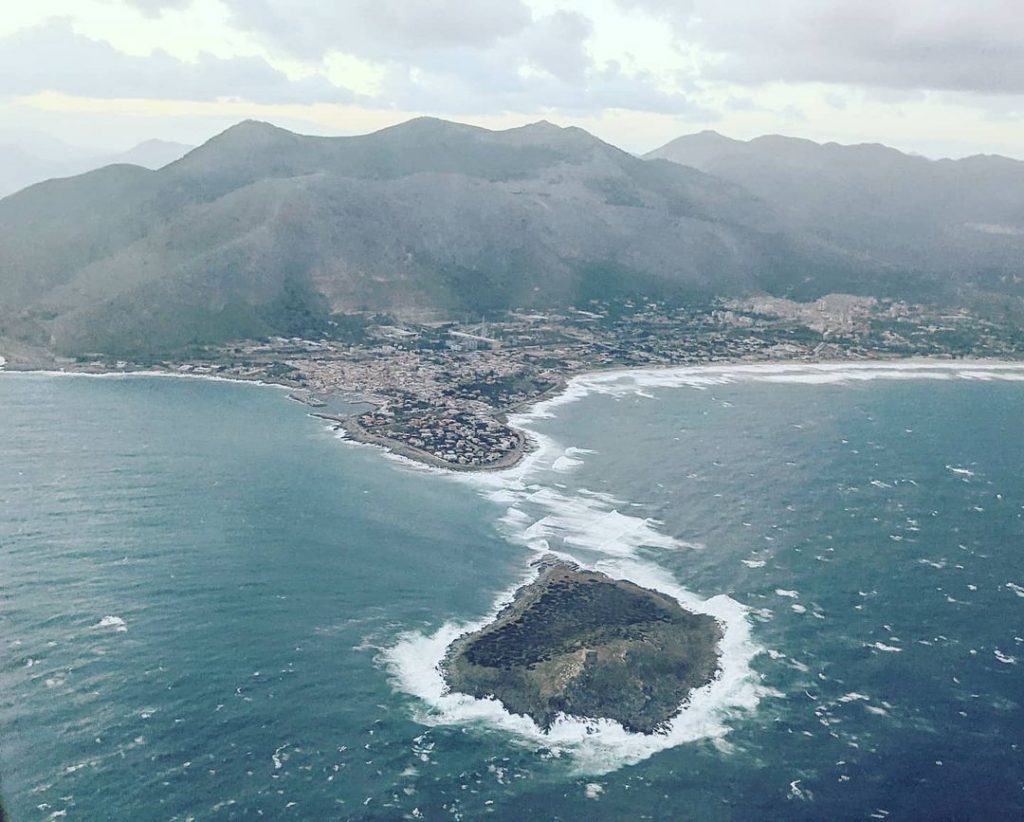 A very surprising event occurred with a German member of our crew, although I won’t name any names. Events unfolded in such a way that this crew member believed he had been kidnapped, or shanghaied, by my skipper Josh and our Swiss crew member. 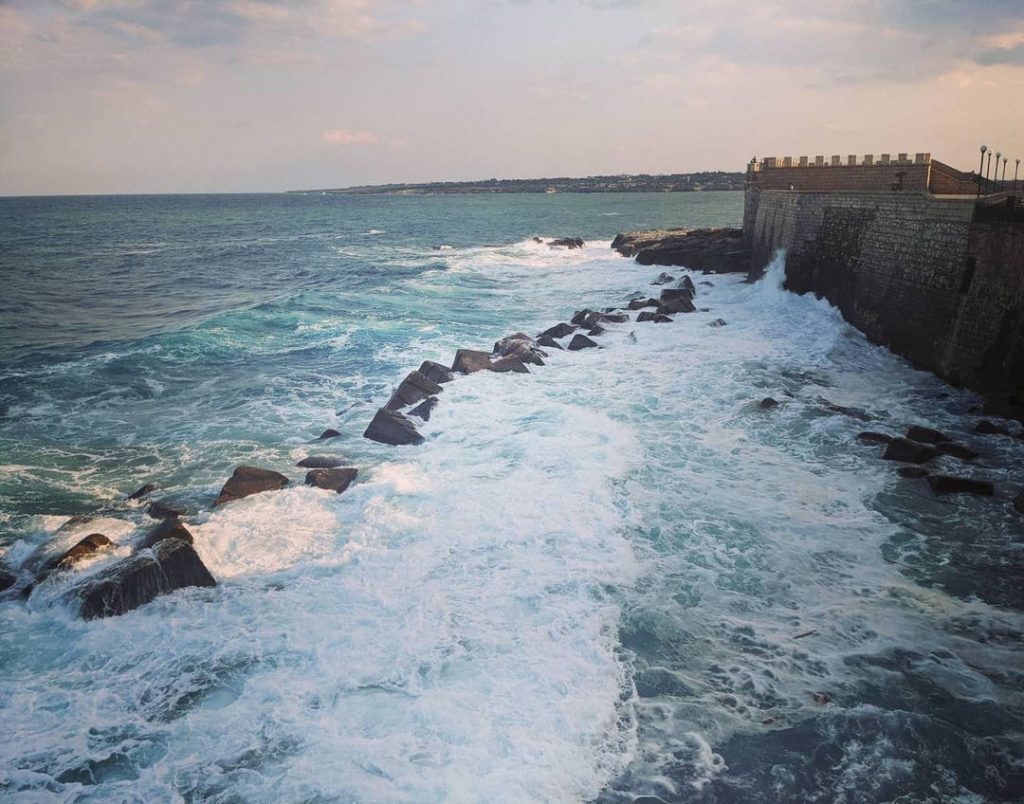 Trouble off the coast of Sicily

So why did the crew member think he had been kidnapped? Or had he been??

The Staatenlos had come from Montenegro and was anchored off of Sicily. At the time, Italy was not allowing boats coming from non-EU countries to enter the country without the crew then quarantining onboard for two weeks (or even at all).

So the crew member legally was not allowed to leave the boat, even though he really wanted to leave. And because of that, he thought he had been shanghaied. Even if all efforts and several call to different authorities were made to actually help him.

Josh tried to come up with other solution to this faux shanghaiing, but it was unsuccessful. Then he called the Coast Guard for assistance.

When the Coast Guard answered, they asked him, “Are you the crazy captain who kidnapped that German crew member?” The crew member who thought he had been kidnapped was still on board at this point, hearing the conservation and being obviously shocked Josh found out. Tensions were high after because of this serious accusation which could have brought serious trouble easily. 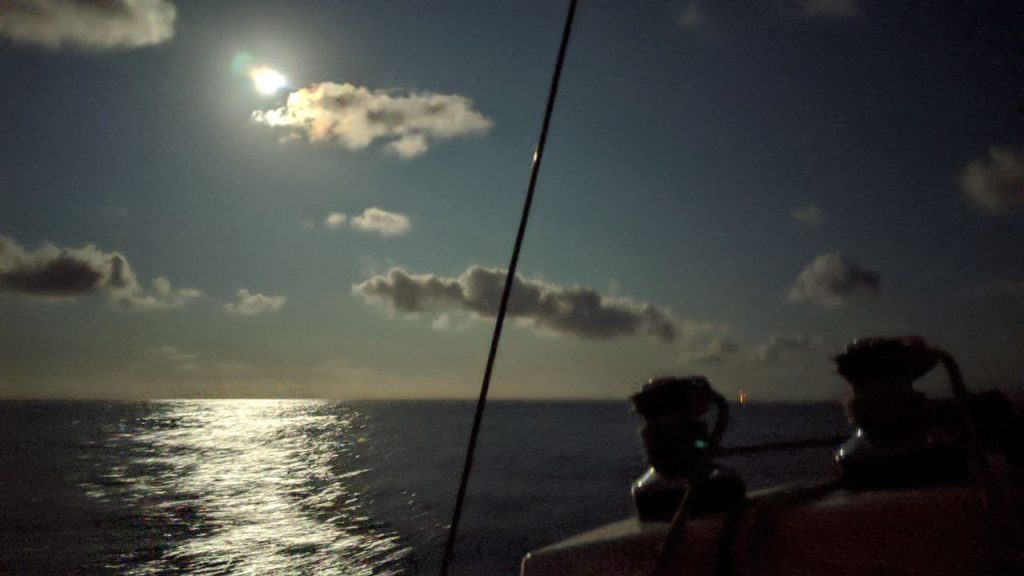 Everything will come to light…

When the Coast Guard arrived to assess the situation, the shanghaiing hoax got even crazier.

The crew member jumped straight into the Coast Guard boat without invitation. The Coast Guard officers immediately became alarmed with concerns that he may have been infected with Covid, or was even potentially on drugs due to his erratic behavior.

The Coast Guard did not believe that he had been kidnapped by the Staatenlos crew. They were more concerned that something was wrong with this individual. The Coast Guard performed a drug test, then a Covid test, and then finally took him to the hospital. From there, he was enabled to leave and fly back home. Luckily, the responsible harbourmaster then finally had no choice than to put his name from the crew list – an important procedure to follow if the SY Staatenlos did not want to get into trouble in the arrival port with a missing crew member. They might have well thought he was not shanghaied, but keelhauled… 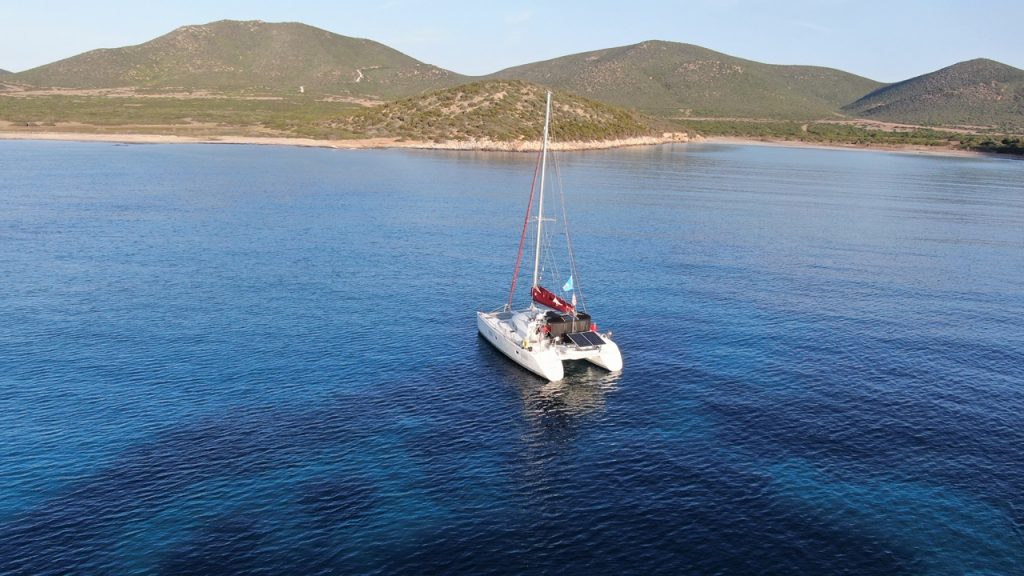 Kidnapping accusations are almost as serious as rape accusations, so luckily nothing happened and the Staatenlos could sail away from Sicily freely. Lesson learned – future crew members are checked more rigourously on their soundness of mind.

Now there were just two other crew members left on board. They would make it all the way to Sardinia, where another storm was already on the way. 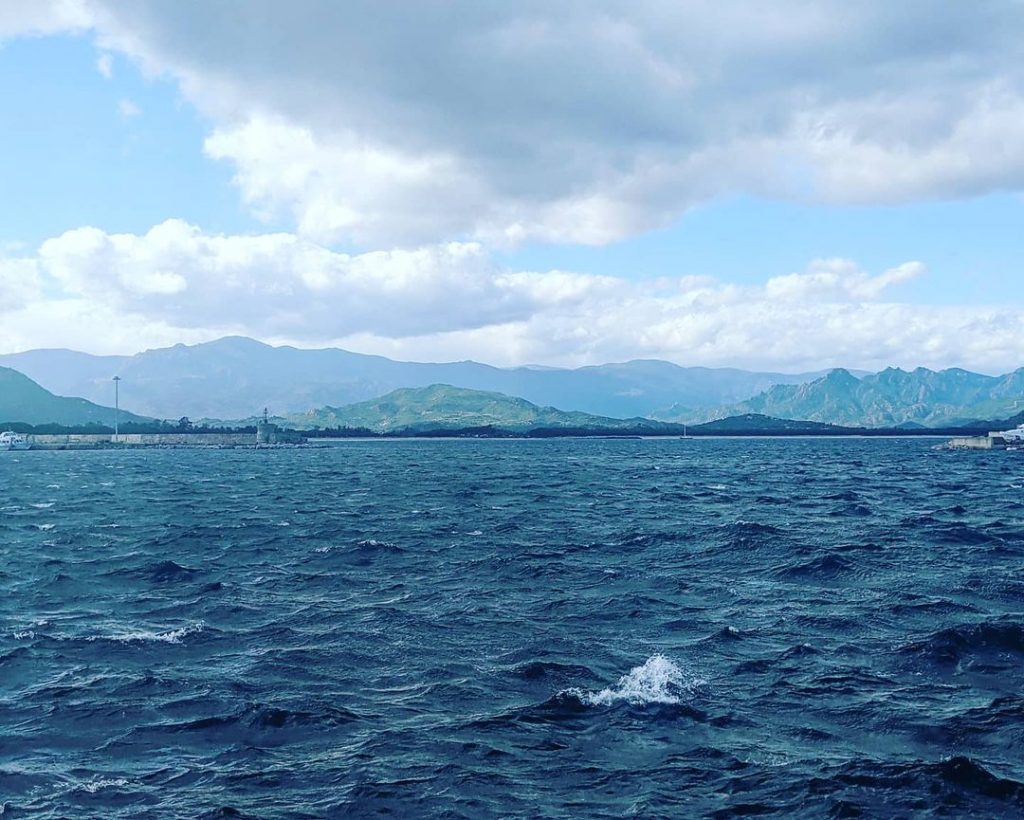 After reaching Sardinia, the remaining crew members stayed in Carloforte, which is a town on a tiny island off the southwest coast of Sardinia. No one cared about the mandatory two-week quarantine period there, so they were able to dock without big issues. They just settled into the transit port and stopped to wait out another storm. 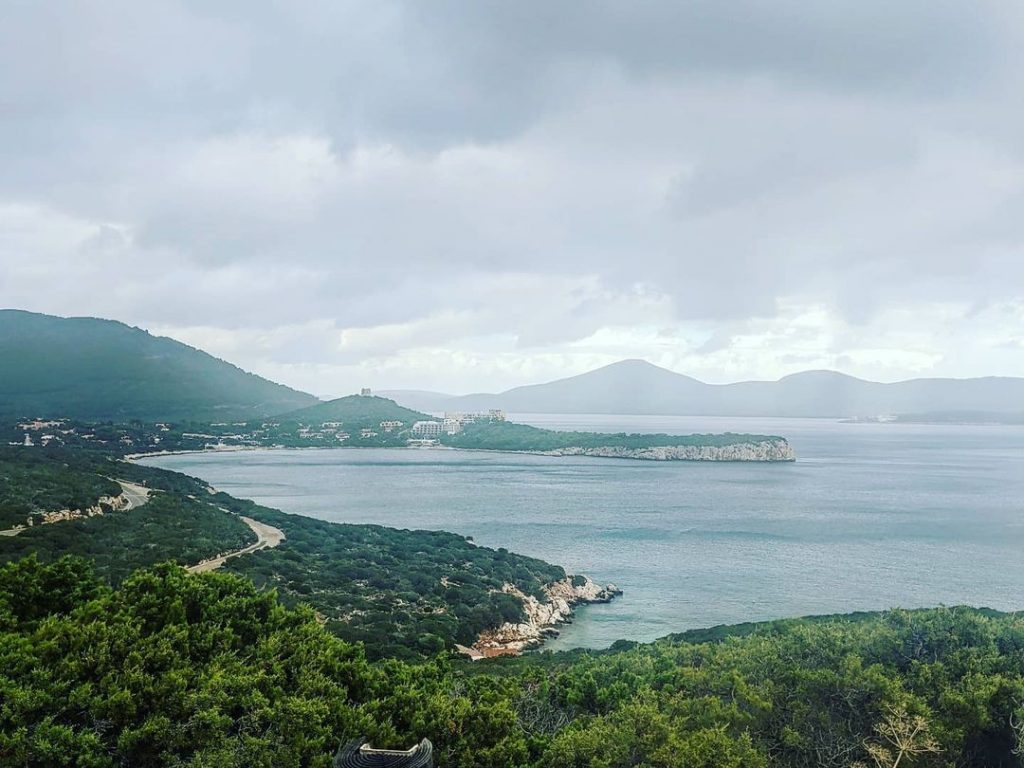 A nice bay to drop anchor in Sardinia – but actually the SY Staatenlos has not been here, only Christoph

After that, they sailed for another two days to Mallorca, where there were extremely high waves and I was already waiting for them on land.

On this leg of the journey, there was another crew member, an Austrian named Florian whom we had met previously in Croatia. He joined the crew after flying into Sardinia. 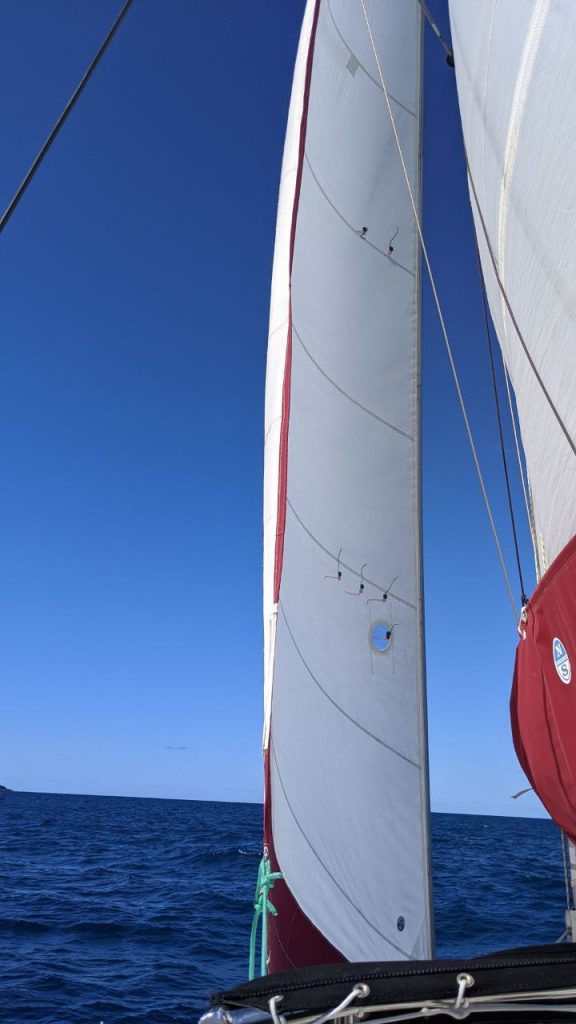 So that is, in short, what transpired aboard the Staatenlos over the course of a hectic three weeks that I missed while business tripping and vacationing. No, the Staatenlos is not kidnapping sailors. Actually, there is no shortage of people wanting to step foot on its deck and sail the high seas. For our passage from Mallorca we got more than 60 applications!

As previously mentioned, we would focus on the Staatenlos’s journey from Montenegro to Mallorca, rather than my own. But here’s a brief look at the latter part of how I spent those three weeks.

Like my catamaran, I also paid a visit to Sardinia. In Sardinia, I found myself missing the sea and my boat. 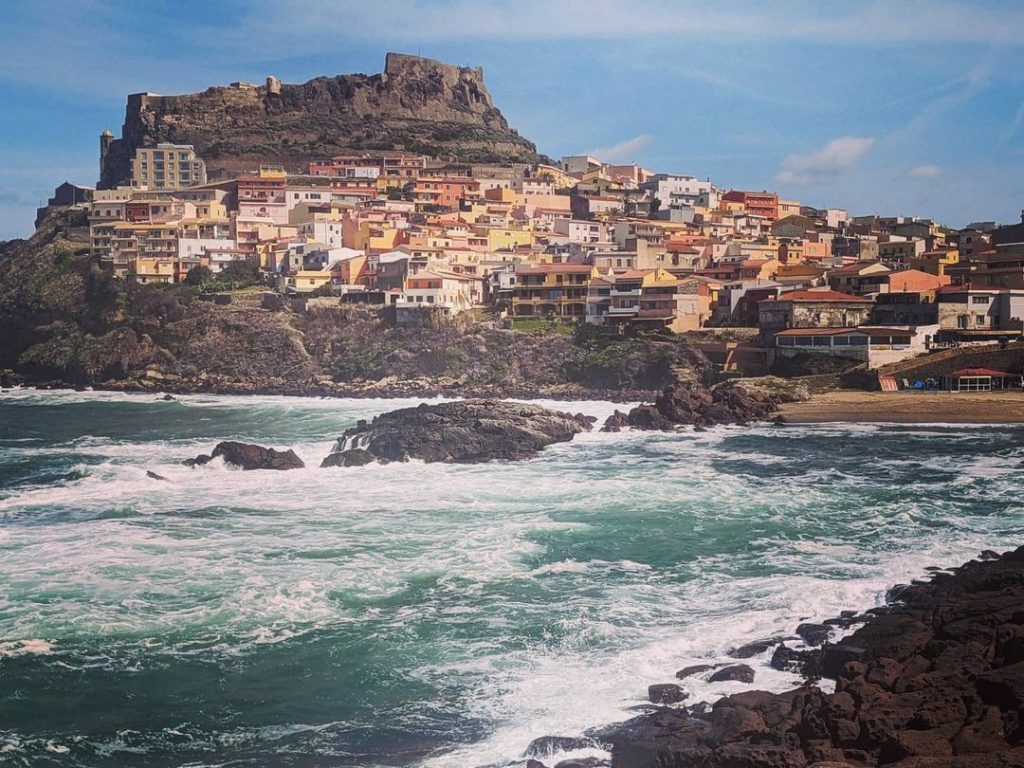 Will be back at sea soon…

I flew from Sardinia to Switzerland. I ventured to Switzerland to meet some friends and to be stationed for an important business meeting in Lichtenstein. 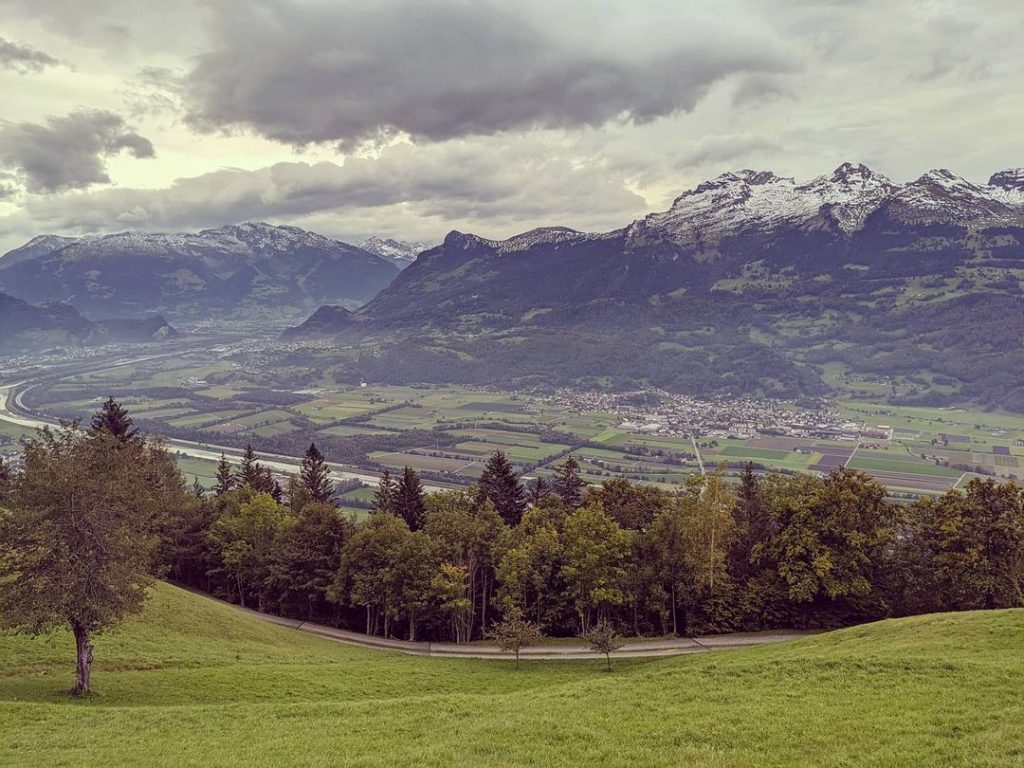 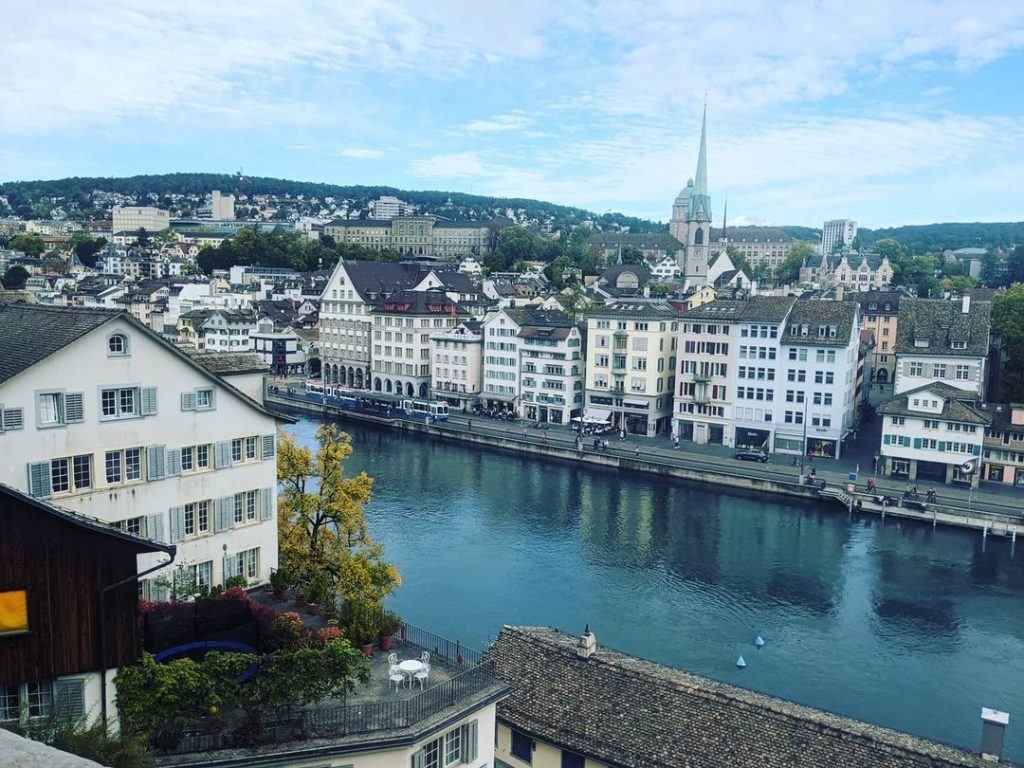 After Switzerland, I flew into Mallorca to await the arrival of the boat once again. 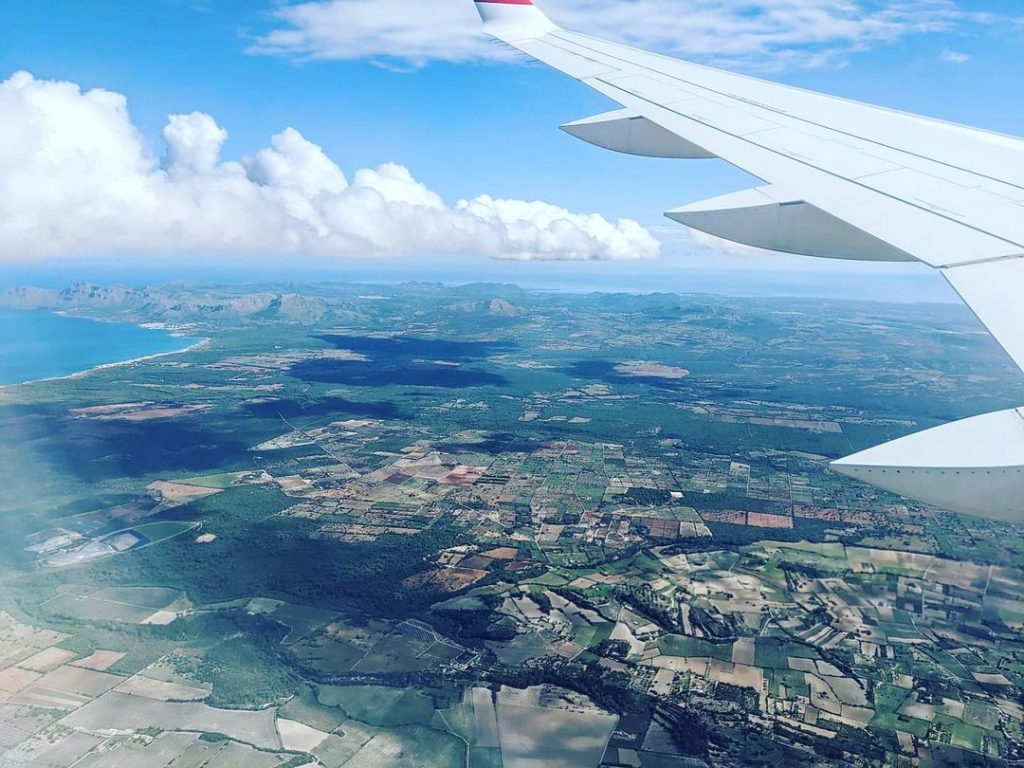 While I waited for the arrival of the boat, I did a lot of consulting work and also explored Palma de Mallorca a bit. I enjoyed running around and meeting some people I know who live there year round. It was nice to meet in the evenings and see Palma a little. 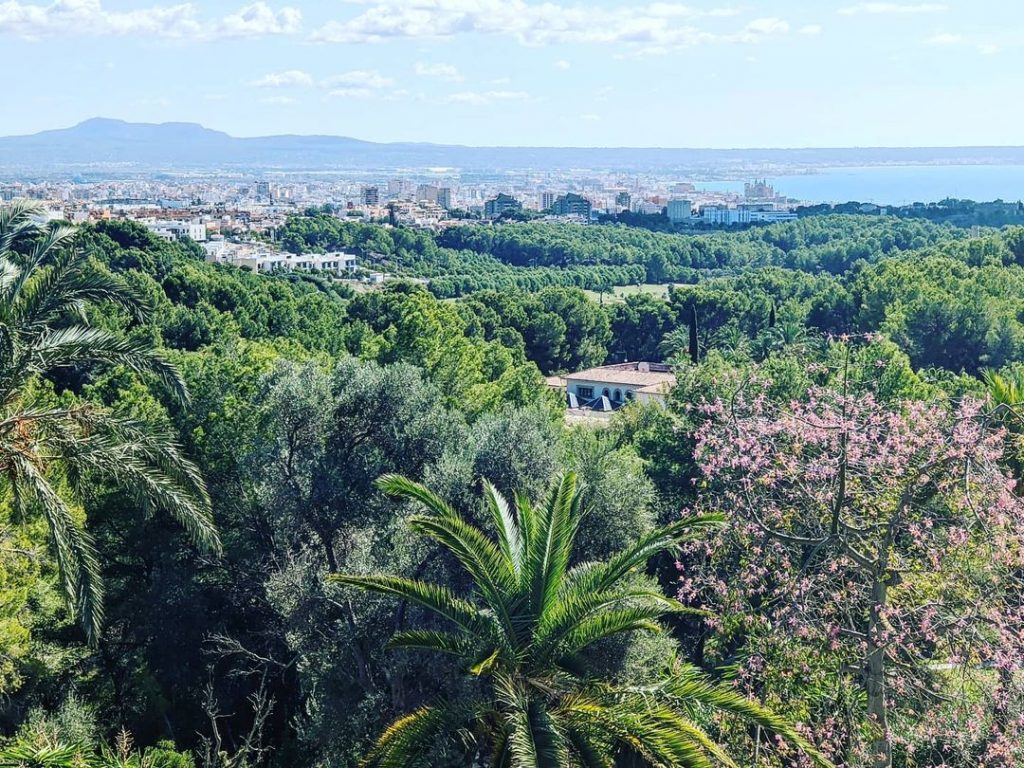 View from the hotel

I waited for the boat which arrived there from Sardinia after four days. As you can imagine, the crew was very happy to see land again after a rough ride. 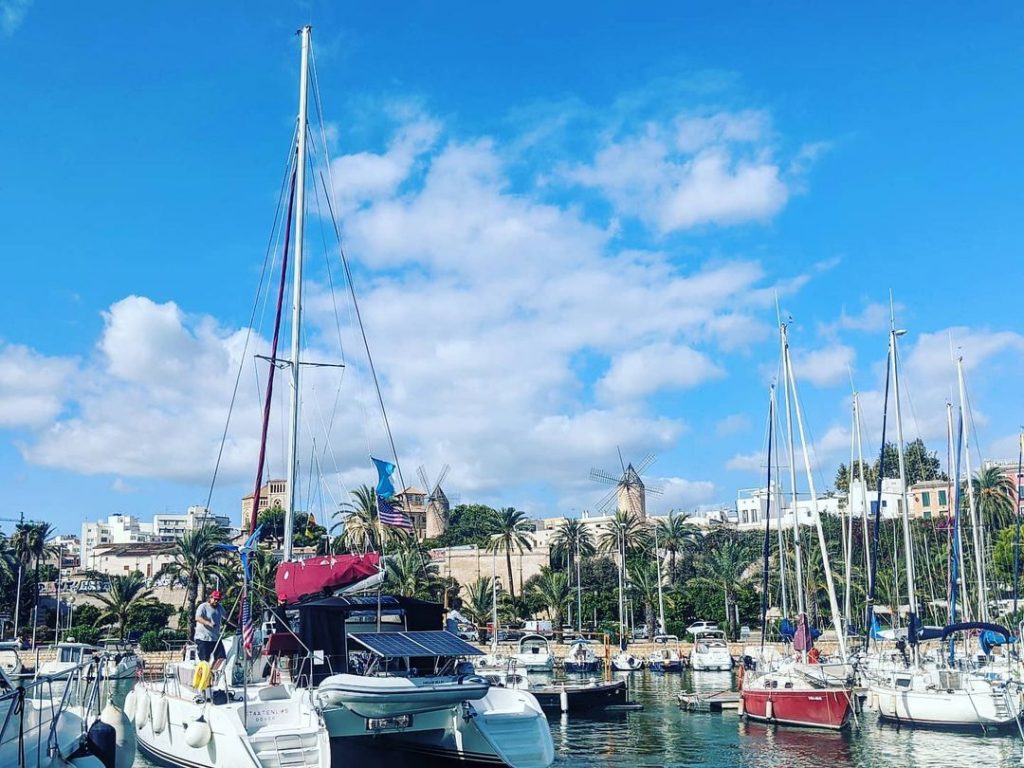 Arrival of The Staatenlos Catamaran

I invited everyone who arrived aboard the Staatenlos to a nice dinner at an Italian restaurant in Palma that evening. We all had good fun and shared a great dessert plate, which everyone was very happy about. 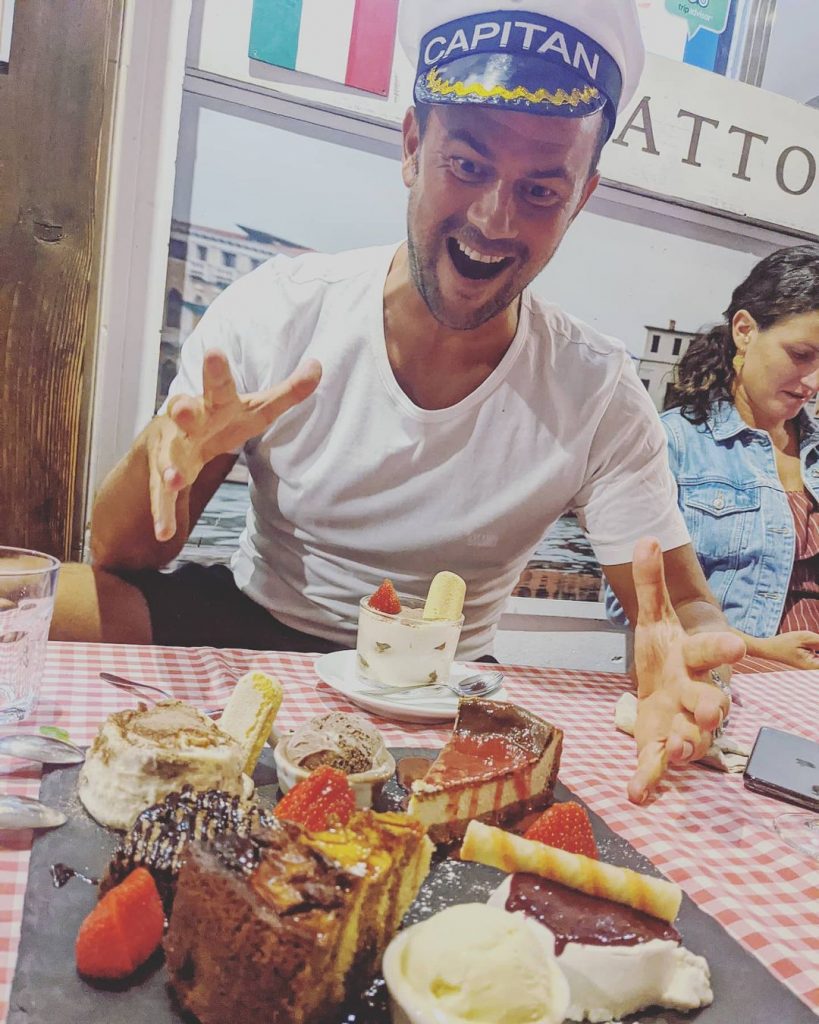 Captain’s dinner, or rather dessert (this is not the captain, though)

The next day the Swiss girl who sailed aboard the Staatenlos to Mallorca had a flight back to Switzerland. The rest of us stayed at Real Club Nautico de Palma (the yacht club) in the marina, which was a pretty cool experience.

One day later, we again boarded the ship to set sail on a three-day tour around Mallorca before crossing the rest of the Mediterranean en route to the Atlantic, which you’ll read about in an upcoming post.