The SY Staatenlos sails to Sal

The SY Staatenlos sails to Sal 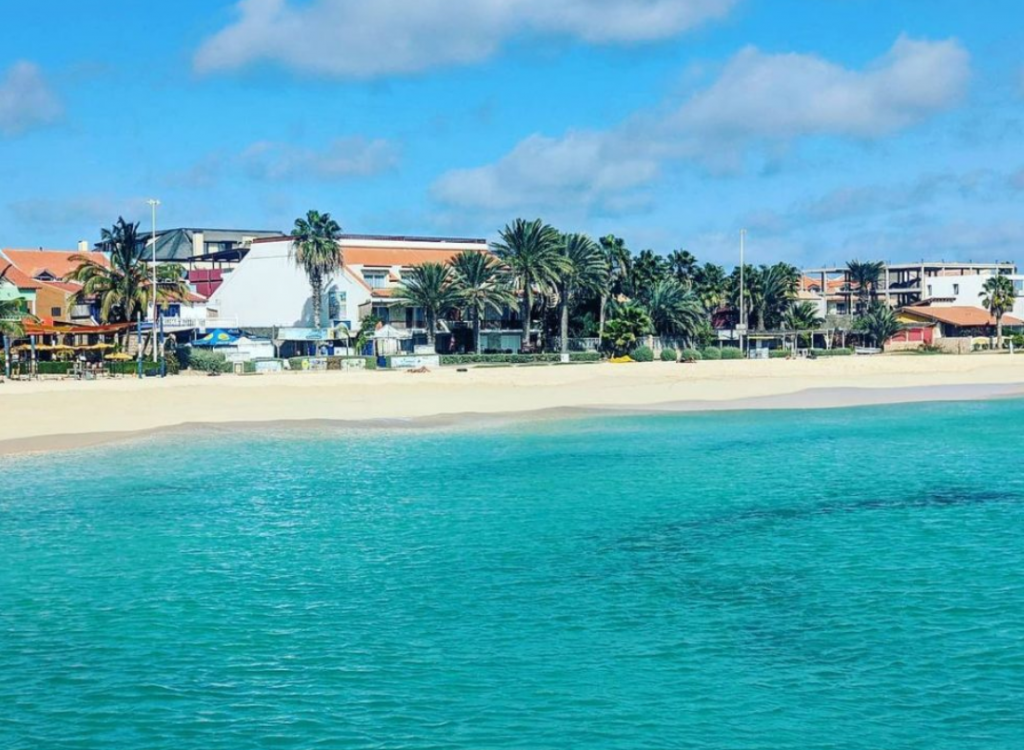 We escaped Cape Verde’s island of São Nicolau just in the nick of time. After being hauled off in a police car to get our covid-1984 tests done, we left the marina of São Nicolau. We had been having a nice time on the island up until we were forced by police to be subjected to unwanted medical tests. After the experience of being poked and prodded by needles against our will, we were ready to sail far, far away from São Nicolau. 😡

Still sailing the island nation off the west coast of Africa, we were destined for a salt island with mud and minerals… and sharks. Would our encounter with the sharks be as scary as our run-in with the plandemic police? Read on… 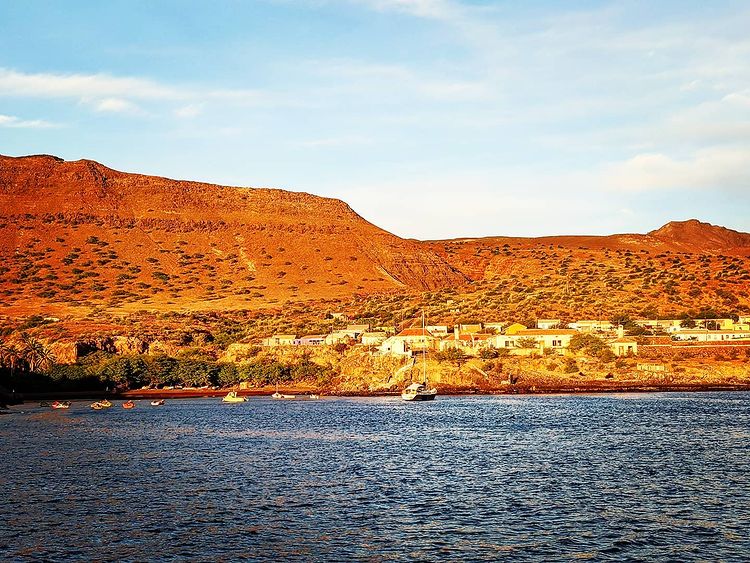 Our last day in São Nicolau

That day, we had planned to sail to the island of Sal, which is a considerable distance from São Nicolau. The two islands are situated about seventy miles apart, and the ride would take ten or eleven hours.

However, our morning of covidiocy delayed our plans because by now it was already too late in the afternoon to sail all the way to Sal. Instead, we decided to stop at a different bay on the same island of São Nicolau. The bay was nice, so we stayed there for a couple of hours, had some steak for dinner, and let the drone fly. We were able to take some nice photos with the drone of a little fishing village which can only be accessed by sea. 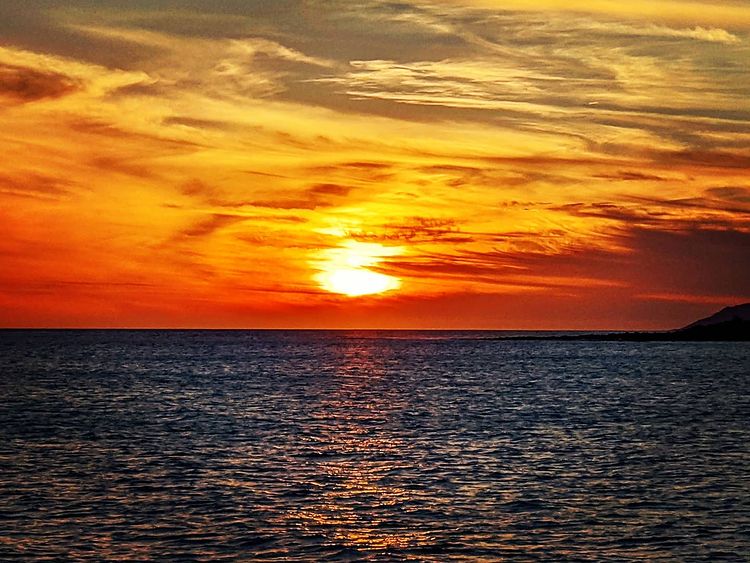 Waiting for the night to fall before sailing onward

We left our anchorage in the bay at about two in the morning to start sailing to Sal. We were lucky because the weather was very nice that day. There was almost no wind and the waves were gentle, so we just motored all the way there.

While “no wind” may not sound like the ideal condition for a catamaran, it is much better than being on the wrong side of the channel effect, as I wrote about in my last blog. In fact, just two days after we sailed to Sal, a strong tradewind picked up which would have made our journey very difficult. Sailing to Sal against harsh wind and waves would have been uncomfortable, so we were glad to have made it there just in time to avoid that nasty weather. All in all, it was an uneventful ride from one island to the next. Sometimes, an uneventful ride is better than one which is overly challenging. 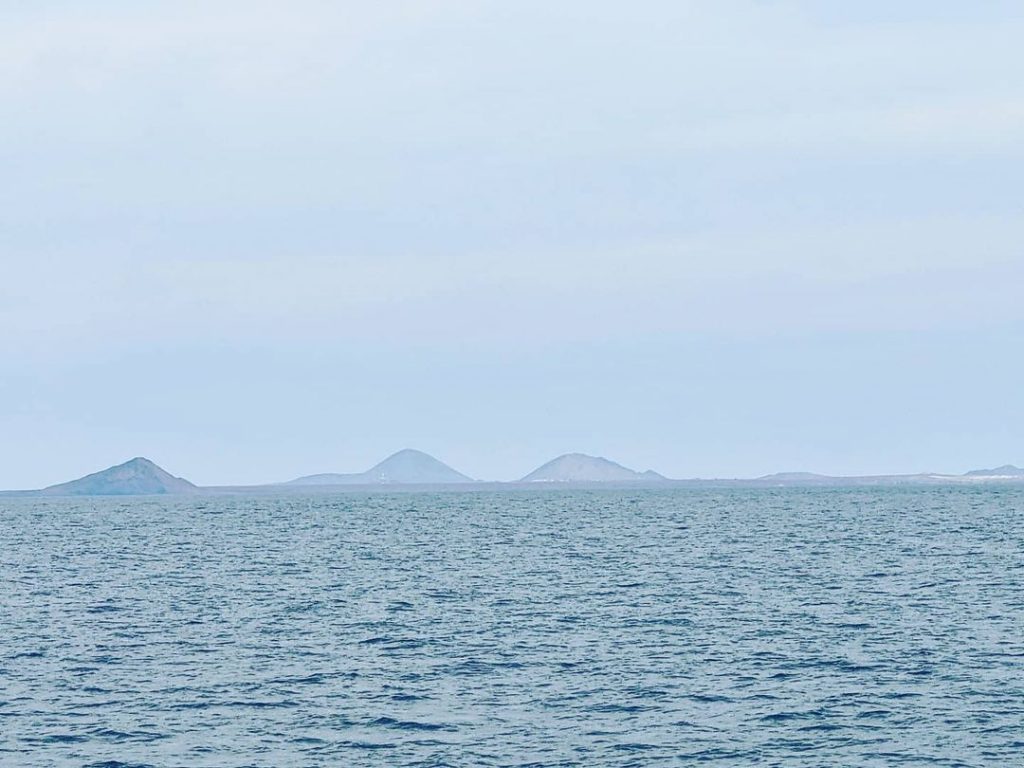 First sight of Sal ahead in the distance

In the morning, we arrived in the town of Santa Maria on the southern tip of Sal. We anchored just about a hundred meters from the beach in a beautiful azure bay with incredibly clear water. This prime location would make it easy for us to access and enjoy the island. 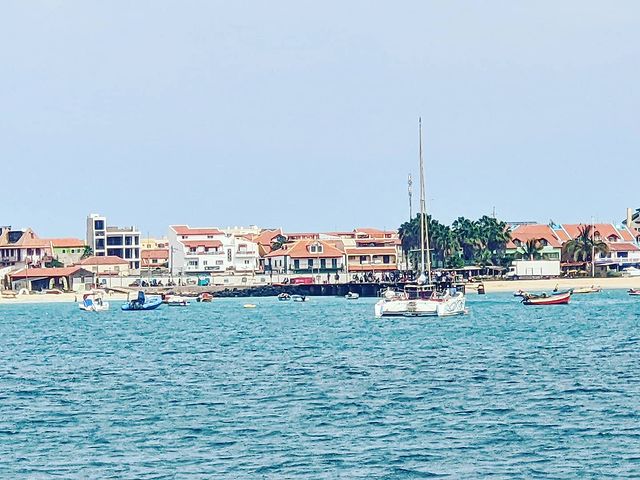 There were just a few other boats anchored there in the bay.

Santa Maria features a long, wide beach filled with many fancy hotels, restaurants, and picturesque pastel-colored buildings. It is one of the biggest beach towns and main tourist spots of Cape Verde.

Despite it being a tourist hotspot, there is barely any tourism at all recently because of covid. We were relieved to see that at least some facilities like restaurants were still open, which was a pleasant contrast to São Nicolau where it was hard (especially for the vegans onboard) to find a good meal. 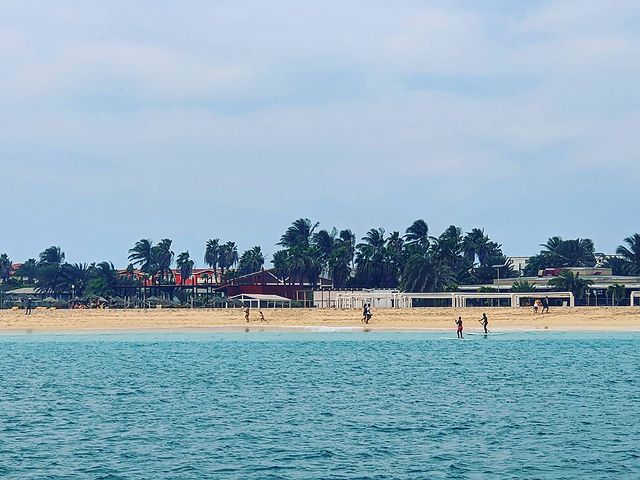 Welcome to the most touristy town in Cape Verde

As we walked down the long beach in this tourist town devoid of tourists, we were greeted by locals who called out “cześć!”

Believe it or not, people were greeting us in Polish here in this Cape Verdean town. As it turns out, there was actually a flight from Poland which brought about two hundred people to the island of Sal, and those were practically the only tourists. When the locals saw us, they assumed that we had been on that flight too. We had a good laugh and proceeded to enjoy the beautiful beach for quite a while. 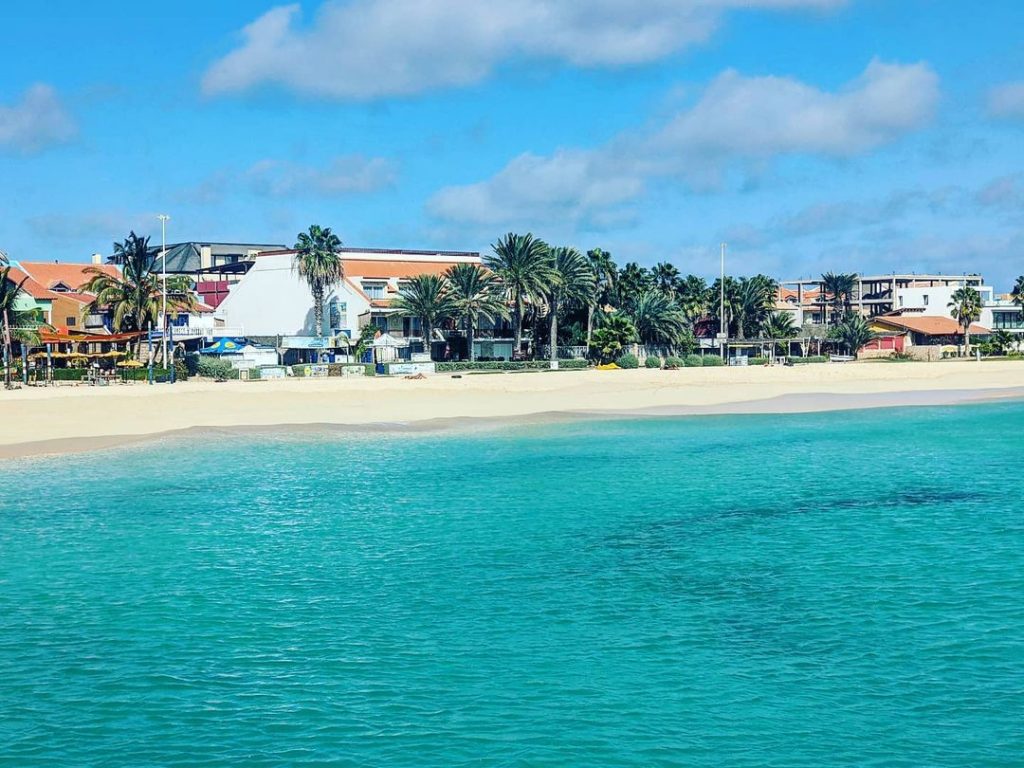 Life is better at the beach 😎

The Salt of Sal

If you speak any Latin language, you can probably guess what the island of Sal has an abundance of: “sal” translates to “salt” in Portuguese. The island was an old salt mine, which is how it got its name. It was once one of the biggest salt exporters in the world, but they ceased exporting salt in 1984, coincidentally the same Orwellian year that we seem to be living in now with the worldwide lockdowns.

There’s not so much salt left on the island of Sal today, but the old salt mines have turned into a pretty cool tourist attraction. The water is so salty there that when you immerse yourself, you immediately start to float, similar to the experience of swimming in the Dead Sea. 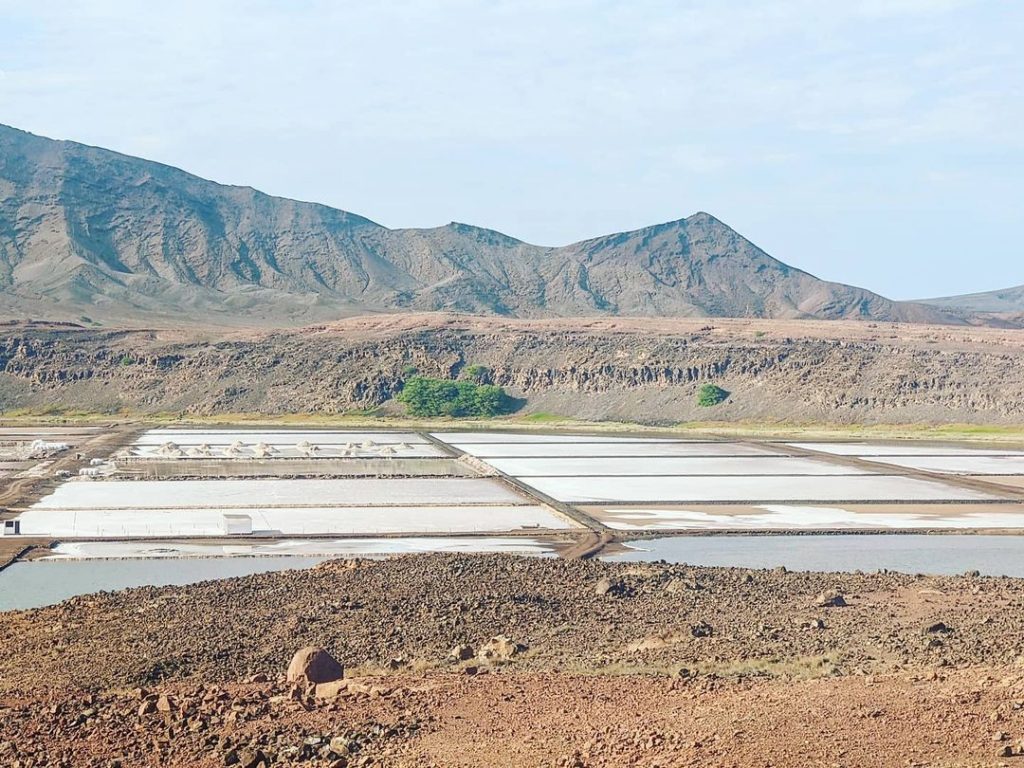 The old salt mine

I had swim in the Dead Sea before, and I had also visited some very salty lagoons in Chile which had the same effect, it was still a very cool experience for us to have there in Cape Verde. Josh (skipper of the SY Staatenlos) and Corrine (the Italian girl we picked up in the Canaries that sailed with us to Brazil… more on that in a future post) never had that type of experience floating in the water before, so we all really enjoyed it together.

One additional benefit of floating in mineral pools such as these is that it’s extremely healthy for the skin, especially when paired with the local mud which is rich with naturally-occurring minerals. We completely covered our faces and bodies in the dark mud, enjoying the sensation as well as the associated healing properties. 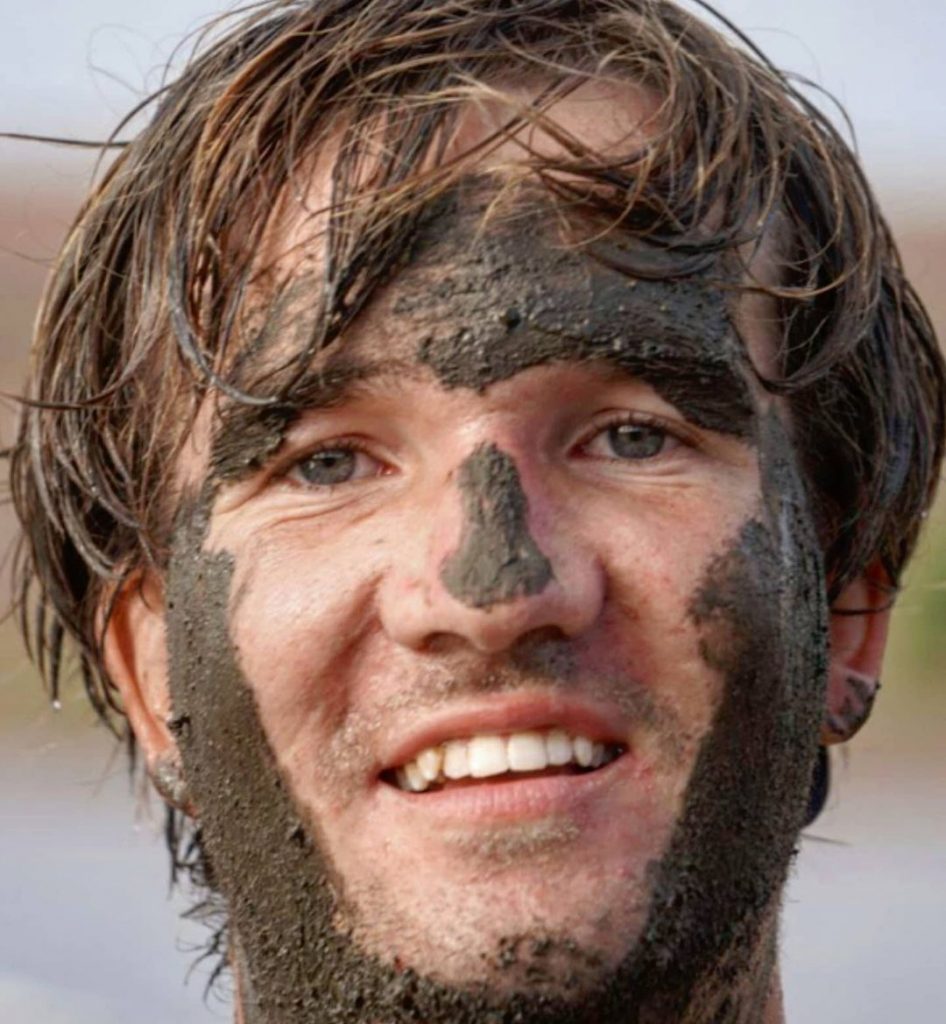 We took some nice photos, enjoyed the saltwater for a bit longer, then took a very thorough freshwater shower to wash off all the salt and mud. At that point, it was almost sunset, so it was time to leave the salt mine complex and head back to Sal to enjoy a nice pizza dinner at the beach. 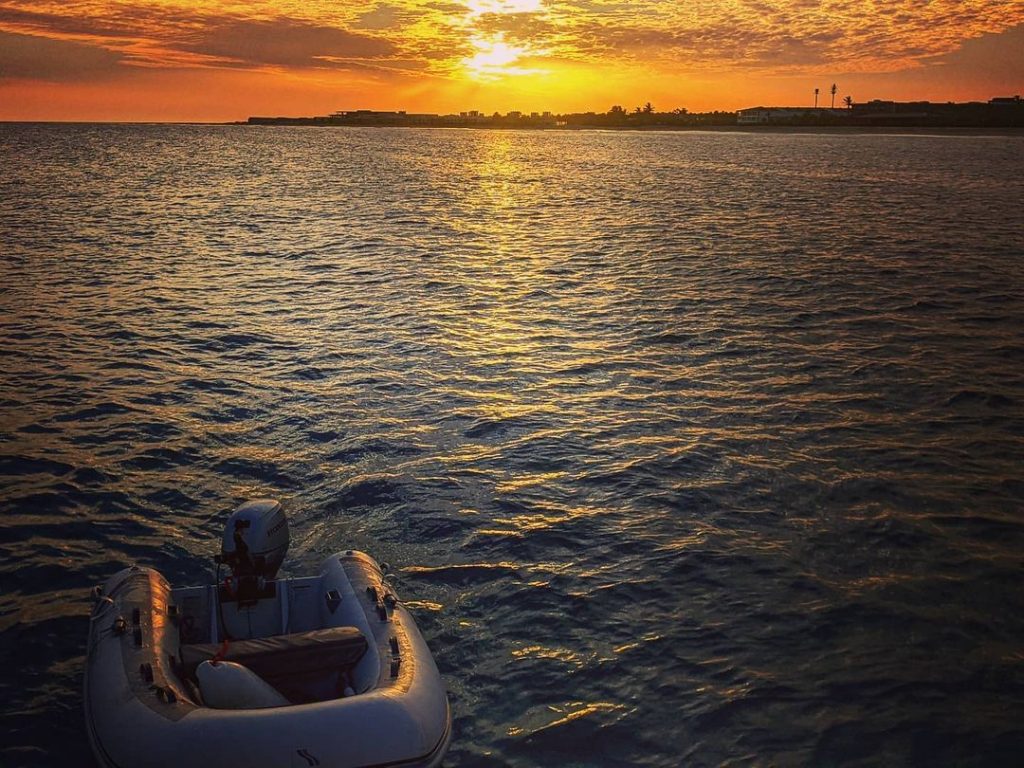 Another peaceful evening at anchor

The southern end of Sal is the main resort area which is packed with places for tourists. We checked out some nice beaches where we could see the local surfers. The waves were nice and there were some great surf breaks there. 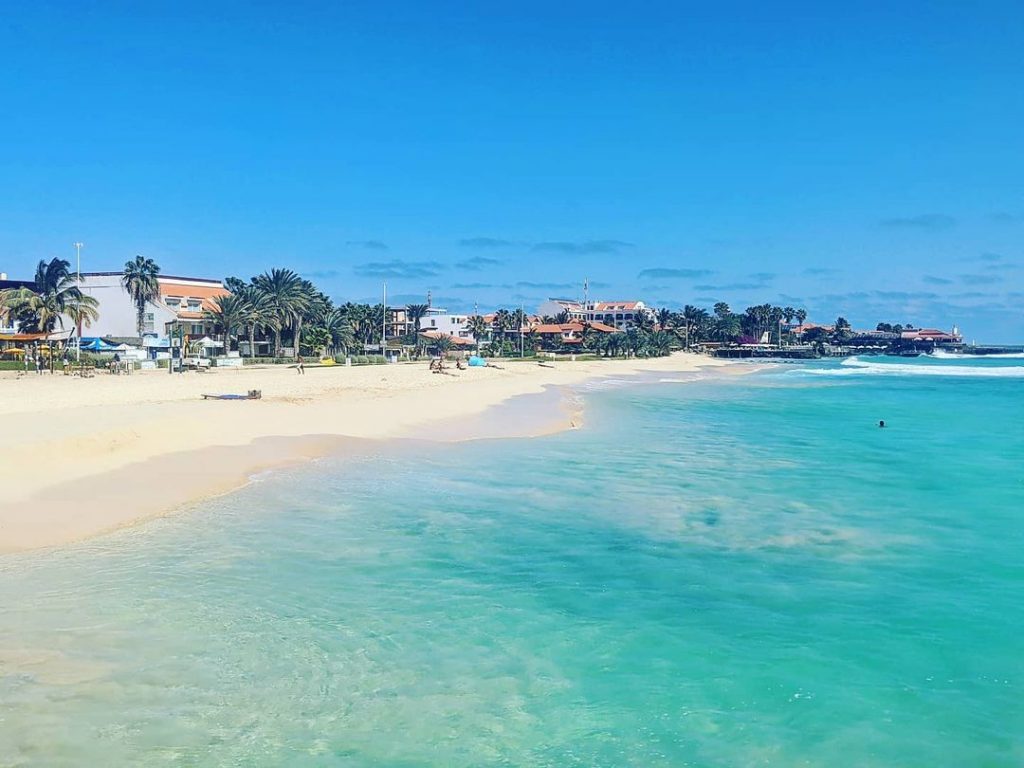 Next, we went to the Palmeira in the northwestern part of Sal. This is the main port of the island where we needed to register our arrival. We went to the fishing port nearby, then checked out a local rum distillery, a la my bachata dancing days in the Dominican Republic. We tasted some different types of spirits and bought some to bring back on board. 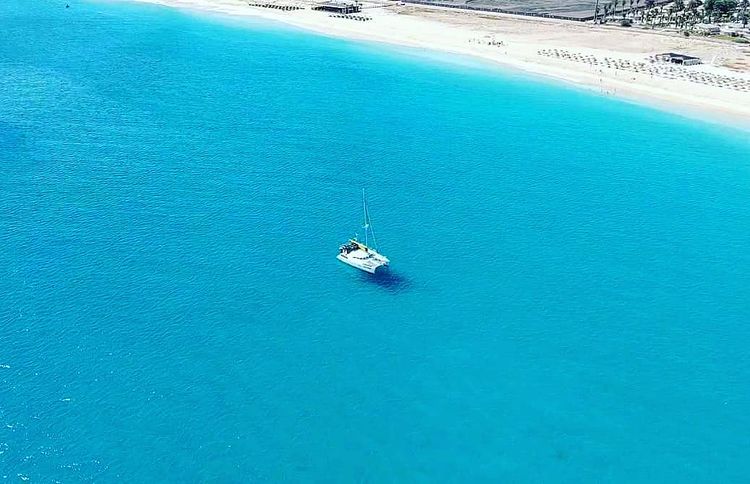 We had plenty of space

Now that we were on the north side of the island, we went to see a natural cave which is called “Blue Eye” in English, and “Olho Azul” or “Odjo d´água” by the locals. It is actually a lava tube that was eroded by the sea and is now full of saltwater, coral, and sea creatures. It looks like a blue eye when the sun hits the cave formation, which is how it got its name.

It is also famous for its high waves. We got into a little bit of trouble there because Josh, daredevil that he is, went near the waves to take some pictures. Immediately, the guards started coming at him and tried to push him away from the water, which of course led to a big argument. Despite the scuffle, I’d say it was a pretty successful morning. 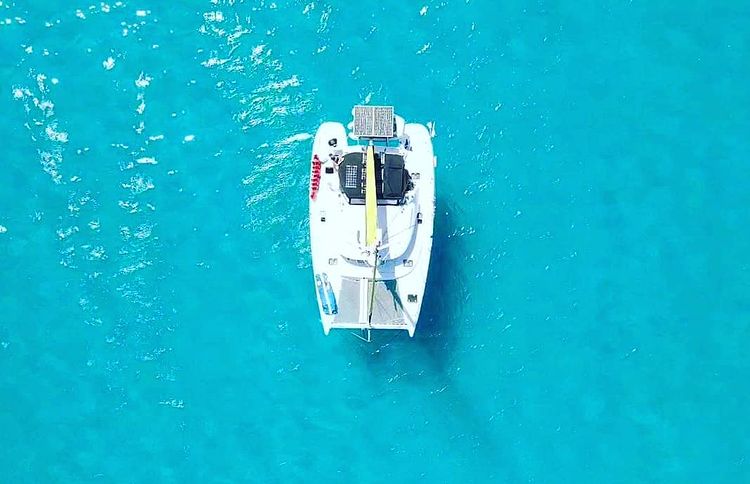 From a bird’s eye view, we look like our own blue eye floating in this incredible water

We continued to Espargos, which is the capital and main commercial center of the island.

We stopped and had some very tasty steak for lunch there before heading out to Shark Bay Beach, which has very shallow water where you can easily see sharks. The type of shark common in this bay is called the lemon shark. They look similar to reef sharks, but they’re only about two meters long and they are harmless. We waded into the sea wearing water-shoes so that we wouldn’t get hurt by the sea urchins underwater. 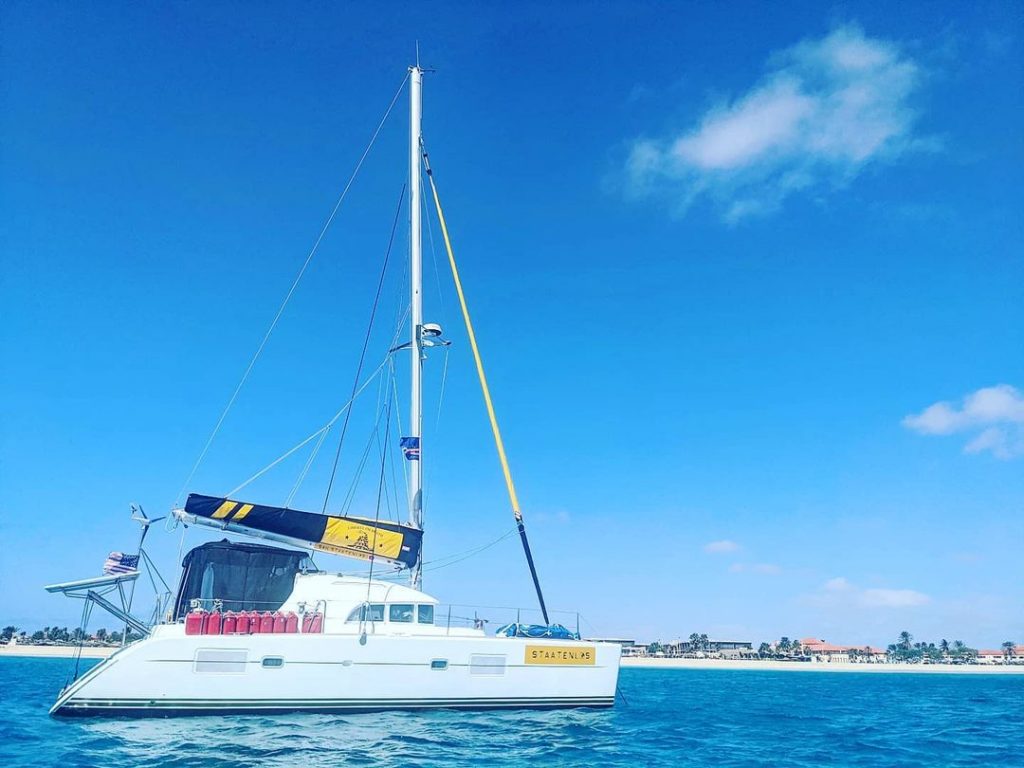 We kept the boat anchored in the main port, far from the sharks

The sharks turned out to be more scared of us than we were of them, so it was hard to get too close. We would see one and start to get close to it, but it would always swim away when we were within two meters distance. Even though the sharks were a bit shy, we still managed to get some nice drone footage of the whole experience.

We spent a lot of our remaining time in Sal laid back at the beach, and we had a lot of fun with the local kids. There were always some kids swimming up to our boat on their surfboards to meet us. At first, we were giving them candy, then it turned into more candy and money and sweets. 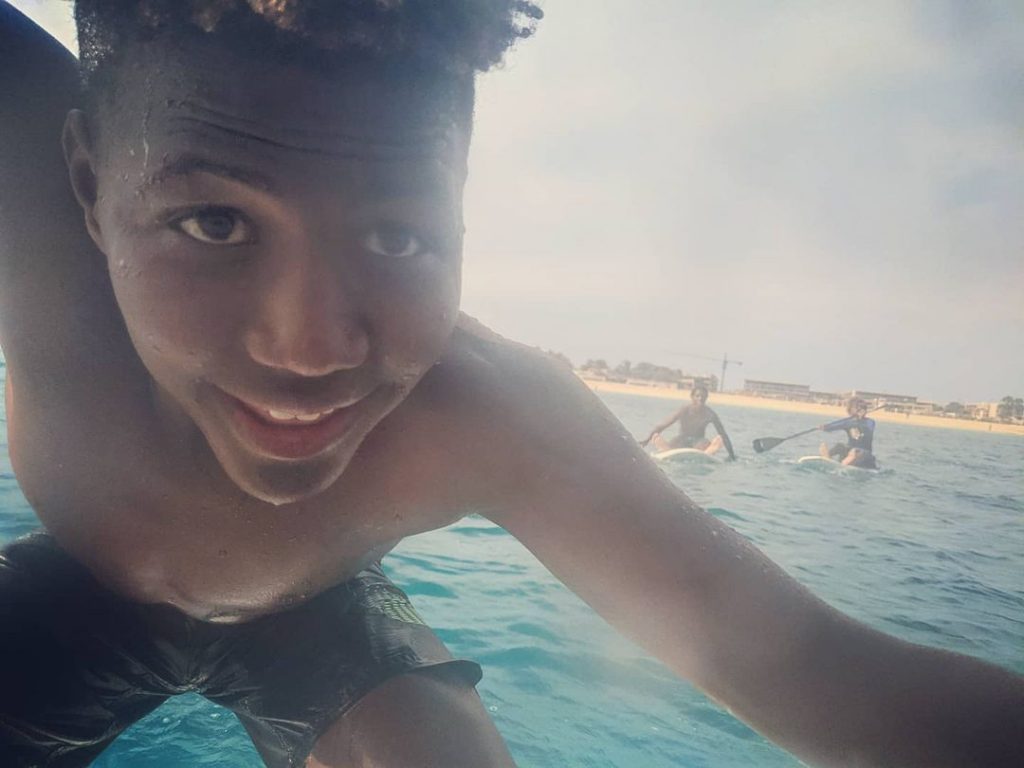 A few of our visitors

Eventually, we even invited them on board to play Mario Kart and Fifa with us. One day, when I was actually at the beach doing some consulting work, Josh and Corinne invited eight kids over and played video games with them for about an hour, which seemed like a lot of fun. 😆 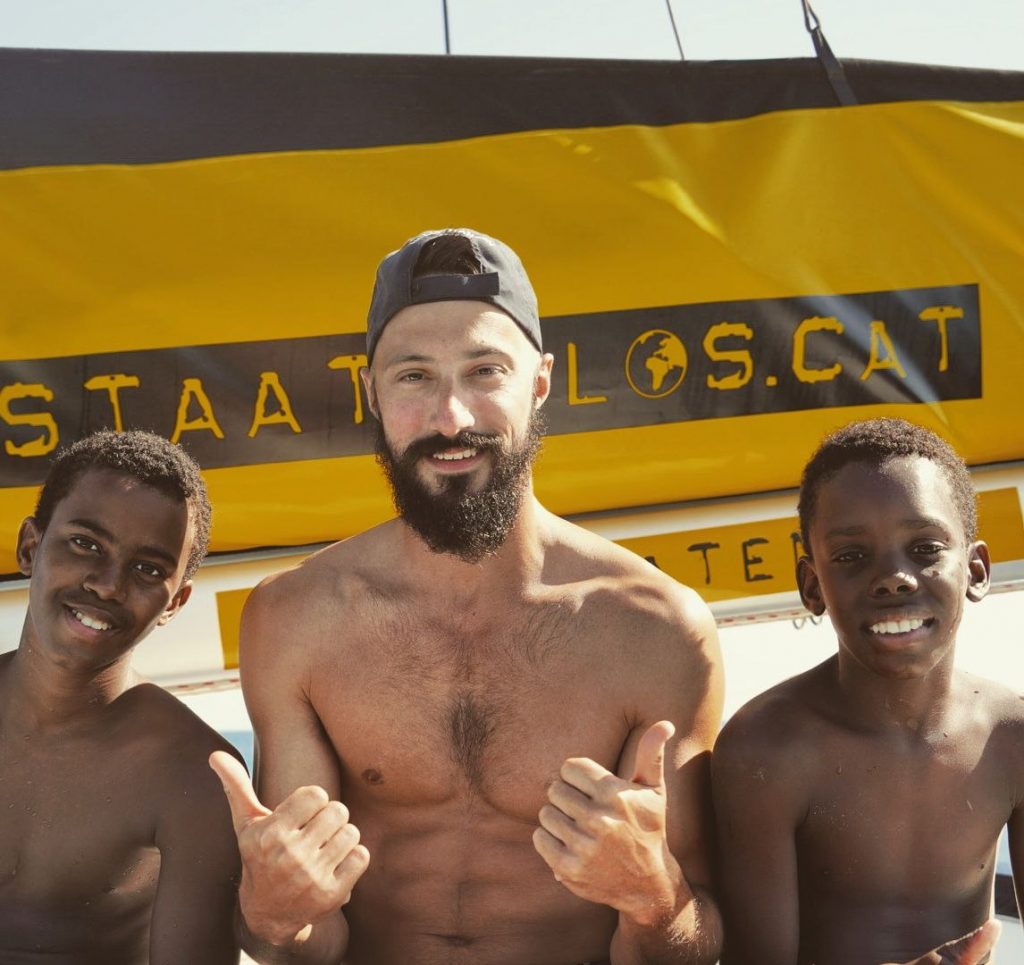 Josh and a couple of local kids aboard the boat

We enjoyed our time on the island of Sal very much for the wide array of restaurants, beaches, snorkeling, lazing around, and flying the drone. We also met a German girl named Gabi who offered to do an island tour with us and a local guide.

We did that and found Sal to be somewhat of a desert island, without that much to see or do, not even any high mountains. In fact, when the island was first discovered in the 15th century, it was named “Llana” which means “flat” in the local language. That should tell you something about the topography of the island. Even though the scenery cannot be compared to what we saw in Santo Antão, it was still nice to cruise around the island for the day and see what it had to offer. 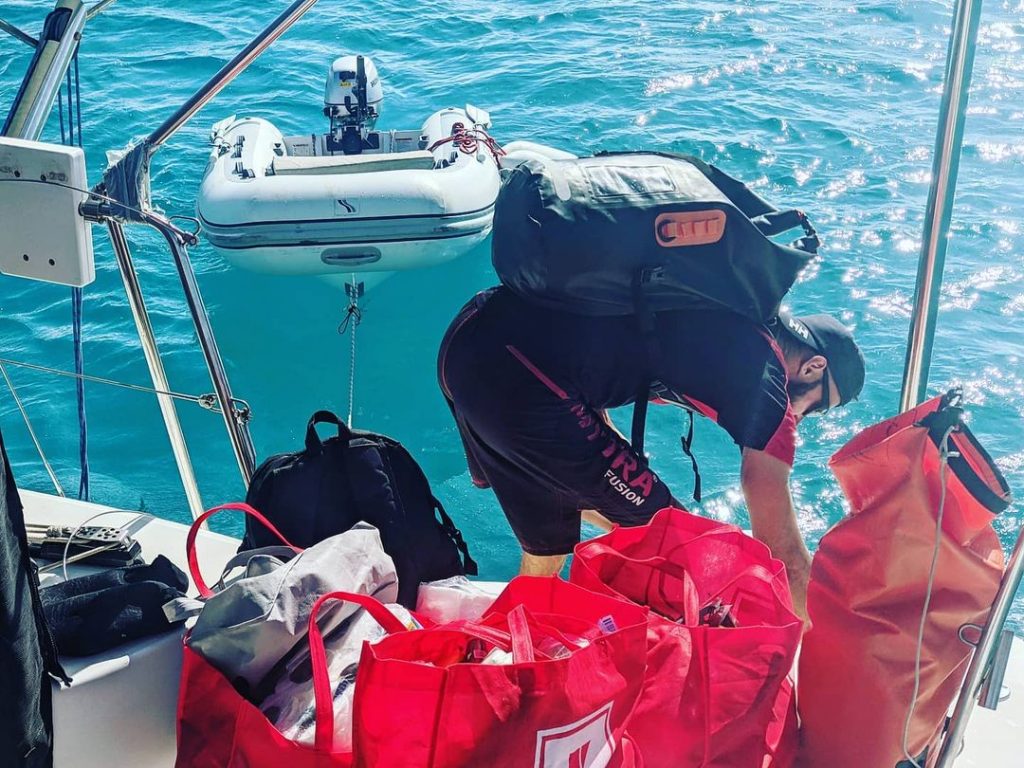 A little shopping to prepare for departure

A Brief Stop in Boa Vista

After we finished exploring Sal, we sailed over to the sister island of Boa Vista, which is a desert-like island similar to Sal. Also similar to Sal, it has a pretty obvious name: “boa vista” translates to “good view” in Portuguese.

While the island is generally flat, it does boast some tall mountains, from which I imagine there must be a “good view.” We didn’t end up ever going on land on the island of Boa Vista. We just chilled for two days and a night at an anchorage just off the island, which was very beautiful. 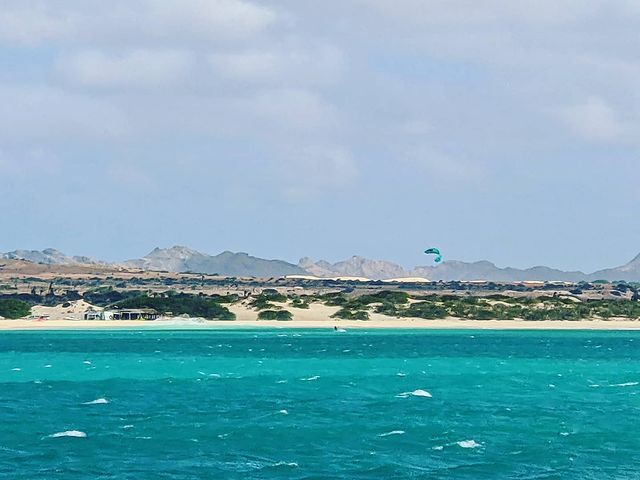 We had a “good view” from the boat

Boa Vista is actually a famous spot for snorkeling because there are many loggerhead turtles there (like the ones we saw in São Vincente), but unfortunately, the wind was already picking back up and the waves were quite rough, so we skipped the snorkeling and just enjoyed the anchorage which we shared with two other boats. 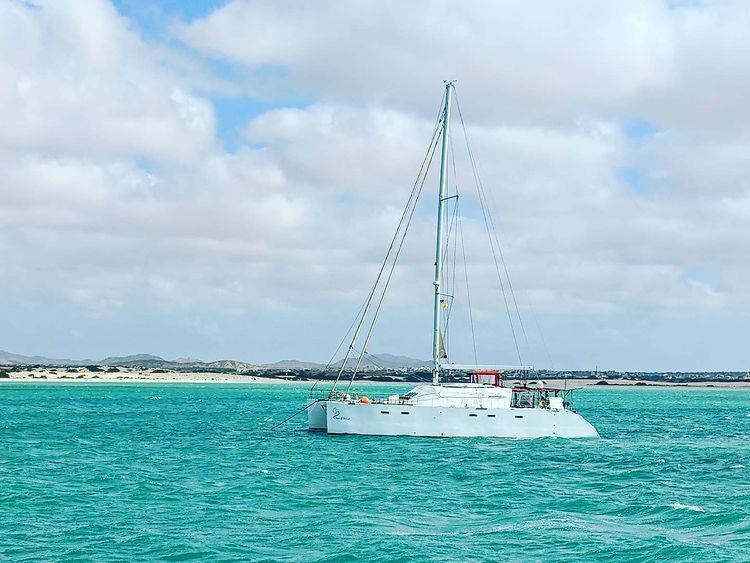 At least we were at a nice anchorage

I did some work there (we have nice strong wifi aboard the boat), and we waited until dark to cross over to the island of Brava. Stay tuned for next time when we explore Brava and more of Cape Verde with the SY Staatenlos! 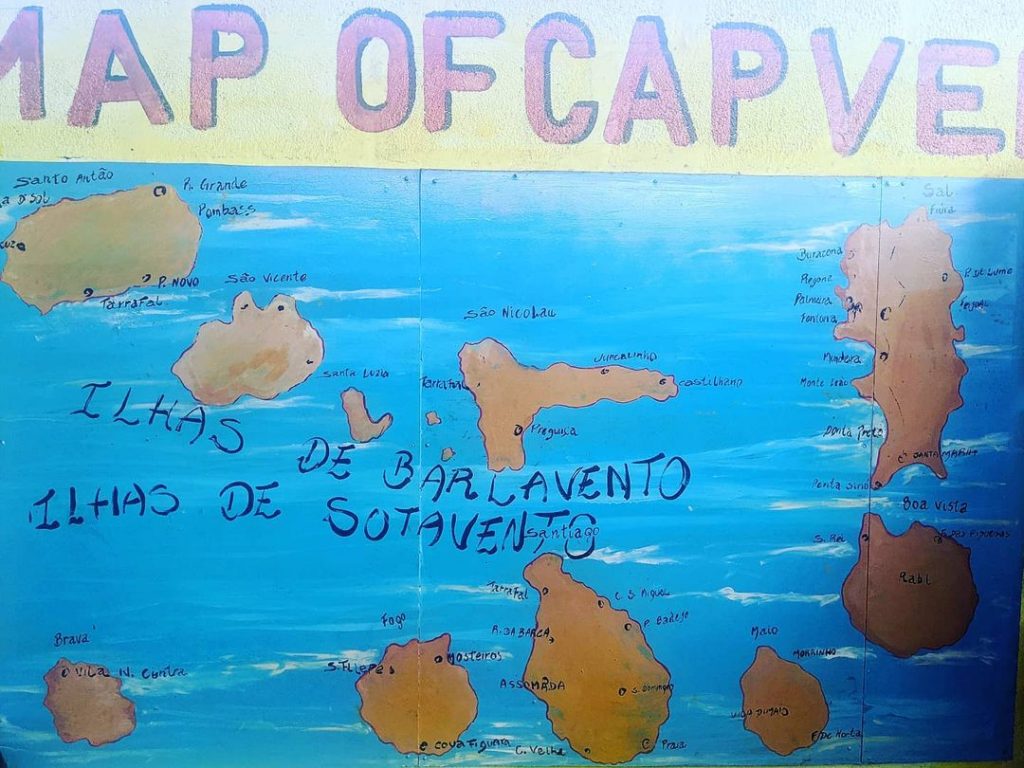 Five islands down, five to go.